15 Best Things to do in Thassos (Greece)

Here’s a list of the 15 best things to do in Thassos (Greece), along with famous landmarks, museums, and other points of interest.

Thassos is a Greek island in the North Aegean Sea. It’s a very beautiful island, known for its rich forests, marble quarries, olive oil, and honey. But despite that, relatively few international tourists find their way to Thassos.

Thanks to its location near Eastern Macedonia, the island of Thassos has long been inhabited and feature lots of interesting places to visit from a historical perspective. There is also a fair share of beautiful beaches in Thassos, many of them wild and untouched.

In this article, I’m sharing some of the best places to visit in Thassos as well as attractions that shouldn’t be missed while visiting the island.

One of Thassos’ religious highlights is without a doubt the Monastery of Archangel Michael. It dates to the 18th century and is known for its fantastic location on a cliff above the southern shores of the island.

Visitors get to enjoy a very impressive panorama and needless to say, the Thracian Sea looks absolutely fantastic from here. Don’t miss the collection of religious artifacts that is on display here.

All the artworks were created by the resident monks. Keep in mind that all visitors need to wear proper attire when visiting this sacred place. Long trousers for men as well as long skirts and covered shoulders for women are necessary. 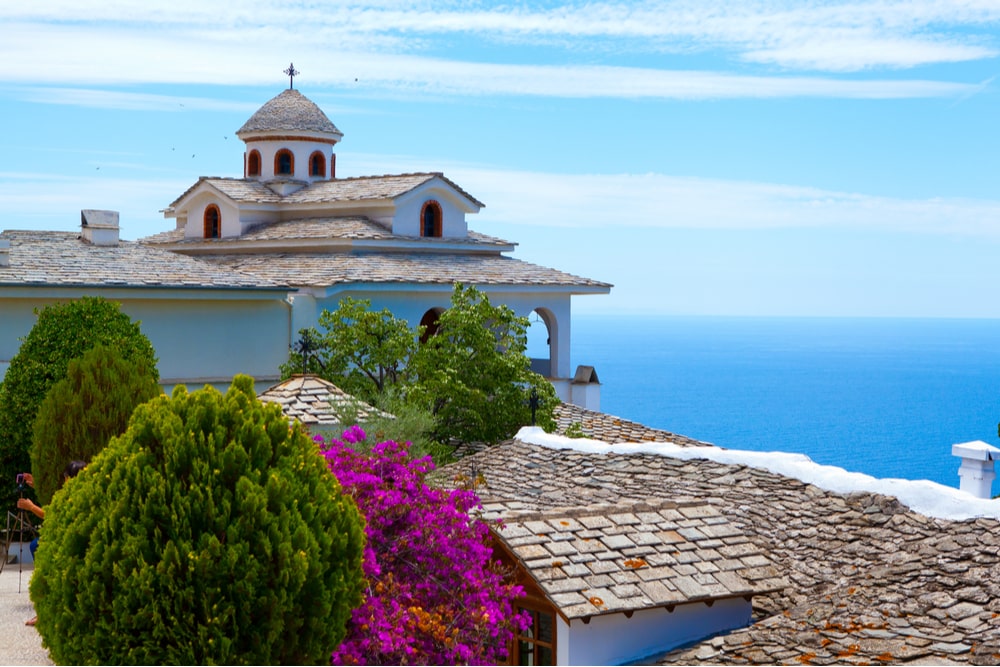 When visiting Thassos’ Paradise Beach you will very quickly realize that it very much lives up to his promising name and is indeed a marvelous experience.

It is situated on the island’s eastern coast and offers a lovely stretch of sand surrounded by picturesque natural surroundings. The village adjacent to the beach is very lovely as well and offers a few tavernas and accommodation options.

There is also a small islet just off the beach which adds to the scenics of the village and its beach. 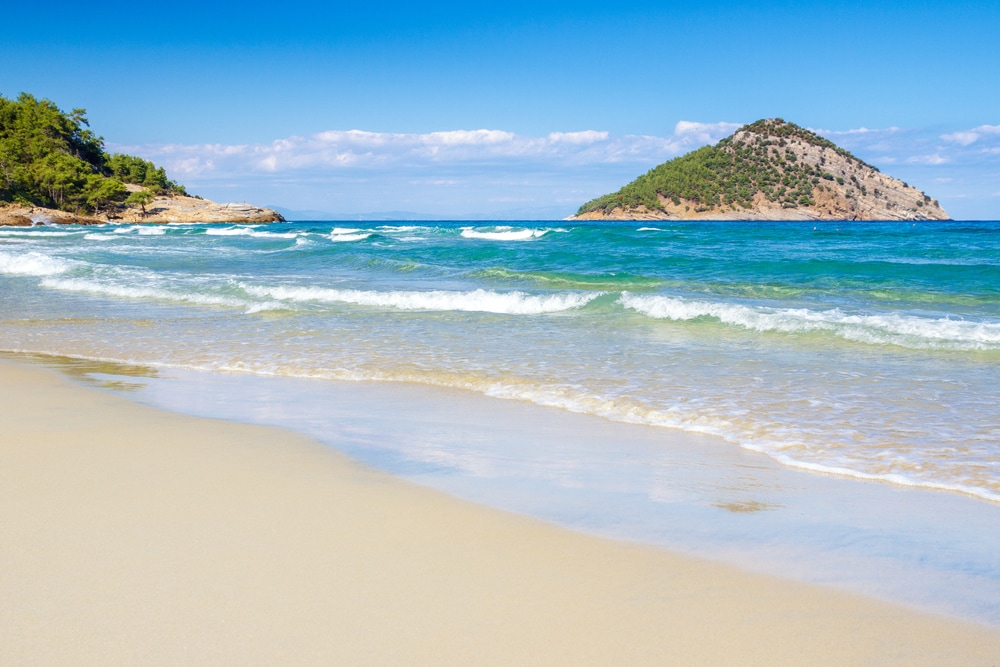 Thassos is known for its great olive oil and many family-owned estates have been producing the popular oil for generations. Many of them are worth a visit as they offer an interesting glimpse into the traditional methods of olive oil production.

One such estate is the Sotirelis Olive Oil Museum which is housed on an estate established in the 1910s. It features a water mill that was used to create electricity for olive oil production.

Panagia is situated in the north-western part of Thassos and is located at around 300m above sea level. Not only is it home to the popular Sotirelis Olive Oil Museum it is also worth a visit for its atmospheric village center featuring the Church of the Assumption of the Blessed Virgin Mary.

Panagia is situated beneath Mount Ipsarion, the island’s highest mountains, and there are several streams of mountain water flowing through the village. One of the highlights of the village is without a doubt the view towards the sea which is just stunning.

The island’s capital Limenas is home to the Archaeological Museum, a real highlight for visitors interested in culture or anyone that is in need of a change of scenery after spending a few hours on the beach.

Most of the objects are every-day objects like ceramics, coins, statues, and inscriptions and tell the story of how life must have been like for the people of ancient Greece.

Just a few kilometers west of Limenas is the popular Tripiti Beach which is ideal for anyone in search of easily accessible fun and relaxation on the water.

The atmosphere here is very relaxed and friendly making it a great spot for families. There are a few accommodation options found here as well as restaurants and amenities like kayak rental but overall the streets surrounding the beach are relatively quiet.

Thassos is home to an interesting ancient theater situated in a natural cavity of the hills of Limenas. The theater is today very well-maintained and hosts the annual festival of Thassos featuring great live music.

What makes the theater a really impressive place is not just its architectural beauty but also the panoramic views towards the water and some of the harbor.

Fans of art will also not be disappointed when coming to Thassos as the local Kappa Art Gallery offers a very interesting collection of modern art.

The owners of the gallery are known for their friendliness and there is a huge variety of artworks to be found here including paintings, photography, small sculptures, jewelry, and more. All the art is made by young Greek artists. Keep in mind that the gallery is open only from May to October.

Visitors who prefer serene nature and quietness should not miss Fari Beach. It is located only a few hundred meters south of Skala Marion and consists of a small stretch of sand amidst rock formations and forests shielding it from too much touristic development.

Despite its remoteness, there is a small dirt road connecting the beach to civilization and you will only have to walk a few steps from the parking area to get to the water. Thanks to its ruggedness the beach is relatively quiet even during the summer months.

Limenas is home to many interesting buildings including the Ancient Agora which was discovered between 1948 and 1955 by a group of French archaeologists.

The agora is believed to date to the 4th century BC and is located right next to the city’s ancient port. The agora served as the commercial and cultural center of the city and the island.

The ruins of this once impressive structure are worth a visit if you are interested in history as they allow a great glimpse into the past. Unfortunately, only small fragments of the agora are left but with a bit of imagination, it is easy to picture how life here must have been like in ancient times.

One of the best places to learn about the history of Thassos is the Theologos Folklore Museum located in the center of the namesake village.

The house in which the museum is situated today used to serve as the private residence of Hatzigiorgi, a former mayor that is known for announcing the Revolution against the Turks.

When visiting the museum you can expect to find a typical village house that features numerous historic artifacts such as traditional attires, houseware, furniture, and tools. There is also an open-air section that displays tools of varying professions.

Likely one of Thassos’ most interesting attractions is the so-called Dragon Cave. It is known for its incredible beauty and its incredible number of well-developed stalactites and stalagmites.

If you are curious why it is called Dragon Cave (or Drakotrypa in Greek) you can rest assured, the reason is a uniquely shaped stalactite that resembles the shape of a dragon. The cave is located a few meters to the east of the village of Panagia, which is also worth a visit.

Another highlight for visitors interested in archaeology and history can be found in Alyki which is a sleepy town in Thassos’s south-east. It offers a peninsula on which an archaeological site is located.

Visitors can marvel at the remains of an ancient marble quarry, a port, and a sanctum dedicated to the Greek god Apollo. There is also an interesting ancient dorp found here that consists of the remains of palaeo-Christian basilicas from the 5th century.

Psili Ammos Beach is located on the island’s southern coast and is yet another beautiful beach in Thassos that is great for anyone in search of fun and relaxation at the water.

This beach is quite small but offers most of the basic amenities you would expect such as a few beach bars, umbrellas, and beach chairs. It can get quite busy during the summer but the waters are incredibly beautiful and great for swimming.

Costis Pottery is located in Limenas’ western end. The store is right at the water and offers traditional pottery goods that are hand-made in Thassos. Many of the goods are very artistic and beautiful and serve as a great present for your loved ones at home or as a souvenir that you can use as a reminder of your fantastic days on the beautiful island. The process of making pottery can also be experienced here as the pottery workshop is visible to the public.

Want more recommendations on things to do in Thassos, Greece? Leave a comment below!